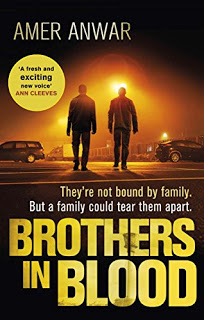 The Book
THEY’RE NOT BOUND BY FAMILY. BUT A FAMILY COULD TEAR THEM APART.
Southall, West London. After being released from prison, Zaq Khan is lucky to land a dead-end job at a builders’ yard. All he wants to do is keep his head down and put the past behind him.
But when Zaq is forced to search for his boss’s runaway daughter, he quickly finds himself caught up in a deadly web of deception, murder and revenge.
With time running out and pressure mounting, can he find the missing girl before it’s too late? And if he does, can he keep her – and himself – alive long enough to deal with the people who want them both dead?
Deryl’s Thoughts
A slice of Asian Noir!

Amer Anwar’s book Brothers in Blood was the winner of the CWA Debut Dagger award and originally called Western Fringes! Personally, I would have titled the book ‘Dirty Cash’ the old age adage ‘The Love of Money is a root of all evil certainly shines through in this story!
Set in West London, Southall, this gritty urban crime thriller is something I could see being brought to life and brought to our TV screens!

The main character Zaq is an unlikely hero and his sidekick Jags?! Well, they bounce off each other really well, they are reminiscent of the old skool duo characters found in Minder (Arthur Daley and Terry McCann)

I did find the book go at a glacial pace, the book was way too long and I found myself stopping reading and going off to do other things, but I was determined to plow through it but a quarter of the book in the tempo is pushed up and the storyline comes full circle there is a scene that made my stomach turn a brutal torture scene, is written and a tense atmosphere brings the story to life a bit more, I was definitely on the edge of my seat by then!

The story is plausible and realistic the author has not gone OTT or went off into tangents which is refreshing.

I look forward to more Zaq and Jags in the future!

Grab your copy for only 99p on Amazon

Finally got my copy of Her Last Holiday by C.L Taylor #asda #bankholidaymonday
I am totally honoured and made up seeing my quote above the blurb of Moonlight Over Muddleford Cove by Kim Nash. Which is out on the 30th March https://www.amazon.co.uk/gp/product/B08VHNLRML
#Saturdayafternoon #reading #THEWHISPERS by @heidiperks #reading #arc #paperbook #outsoon #bookpost #bookstagrammer
"This has to be the best audio I have ever listened to. it is freaking awesome." says @bakersNSSblog about Jailbird by @CaroSavageStory https://t.co/vtPbvXD7ZS
My January reads and a couple of audios and I only have one book left to read on my #netgalleyshelf 😀
#xmas nails #blacknails #arylicnails #tanandglamwallheath
Follow my blog with Bloglovin