Skip to content
Debut author Steven C. Harms joins me today to take part in my Getting To Know The Character Interview with Roger Viceroy

Can you describe your character?

The main character is detective Roger Viceroy, a man in his late thirties, athletic, career investigator, and driven to succeed by a relentless focus on the details, or “molecules” as he calls them. When the story opens, he’s also embroiled in a pending divorce and struggling with his faith.

What is Roger’s job role and where do they work?

Viceroy is head of the Midwest Region Special Crimes Unit (MRSCU), Wisconsin division, based out of Milwaukee. MRSCU is a multi-state investigative agency working directly for each governor of the five states it covers. Its purpose is to take the lead in the investigation of crimes that are particularly serious (serial killings, potential terrorism, etc.), or those crimes that spiral into multiple jurisdictions.

Where did the original idea of him come about?

The best way to answer that is to begin with the idea for the series and then speak to the character of Viceroy. Give Place to Wrath is another way of saying “lay down your hate, release your anger.” The title is part of scripture, but it’s also a universal moral guidepost. So, the idea was to take moral/ethical tenets and implant them into a mystery/thriller series with each book’s main story line revolving around that title’s principle in a very subtle, thought-provoking manner.  Hence, the main character needed to reflect someone of extraordinary high morals and an unrelenting drive for truth despite his challenges and personal struggles, which we all have in varying degrees.

What makes him original?

He’s a thinker and always believes that every crime is solvable if you dig deep enough and pay microscopic attention to detail.

What makes him tick?

Winning. Solving the crime, no matter the personal toll. Fearlessness.

What is his biggest fear?

Professionally, none.  Personally, his marriage being shattered beyond reconciliation.

If you and your character met in real life, do you think you’d get on?

Yes, without a doubt. He’s probably an echo of me.

Who would you like to see play Roger if your books were made into a film or TV show?

The actors that come to mind are:  Michael Fassbender, Greg Kinnear, or Jake Gyllenhaal.

Give Place to Wrath is the debut, so one!  However, Book 2 manuscript is well underway and I’ve written the opening to Book 3, with Book 4’s story line taking shape in my brain.

What’s in store for them next?

Without giving away too much of the next novel, Roger Viceroy will find himself and his team challenged with something beyond anything they’ve dealt with before. The scope of his next mystery jumps from a regional crime to an international whodunit.

You can check out Steven’s debut novel on Amazon 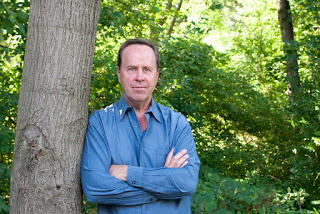 Steven C. Harms is a professional sports business executive with a career spanning over thirty
years across the NBA, NFL, and MLB. He deals with Fortune 500 companies and professional
athletes, managing a portfolio of multi-million dollar sports partnerships.
He’s an accomplished playwright having written and produced a wildly successful theatrical
production which led him to tackling his debut novel, Give Place to Wrath.
A native of Wisconsin, he graduated from the University of Wisconsin–La Crosse. He now
resides in Oxford, Michigan, a small, rural suburb of Detroit.