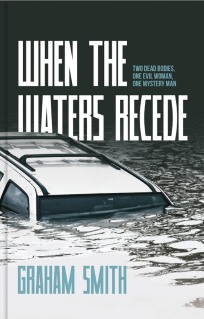 The Book
When a car is pulled from raging floodwaters with a dead man in the front and the decapitated body of an evil woman in the boot, Cumbria’s Major Crimes Team are handed the investigation.
The woman is soon recognised, but the man cannot be identified and this leads the team and their former leader, Harry Evans, into areas none of them want to visit.
Before they know it, they’re dealing with protection scams and looking for answers to questions they didn’t know needed to be asked.

My Thoughts
When The Waters Recede is the third book in the Harry Evans series and boy do I love this series. Graham Smith never fails to disappoint with an OMG start which grabs you hook line and sinker.

The Story starts off with a car is dragged out of floodwaters with a man in the front and a decapitated body of a woman in the boot……BOOM! What an awesome start! So straight away the reader what’s to know who, what, why and when. Well I certainly did! This is one of those stories where I kept telling myself just one more chapter then before I knew it I was racing towards the end to find out what was going to happen next. I honestly couldn’t read it quick enough.

This is one hell of a fast paced totally gripping read which I couldn’t get enough of. It can be read has a standalone but I would advise reading it has a series Harry Evans is a brilliant character he’s old school and kind of reminds me of my dad with his ways.

Like I have said before I love the author’s writing style it is fresh and crisp and there is never a dull moment. Without giving to much away, we see a rather more emotional side to Graham’s writing’s skills in this story, which is woven into this gritty story. You will have to read it for yourself to find out what I mean lol

This story will definitely keep you on your toes, not only is it pulse racing it is utterly addictive which I highly recommend giving it all the stars.

Purchase Link – https://www.amazon.co.uk/When-Waters-Recede-HarryEvans/dp/1910720968/
About Graham Smith
Graham Smith is a time served joiner who has built bridges, houses, dug drains and slated roofs to make ends meet. Since Christmas 2000, he has been manager of a busy hotel and wedding venue near Gretna Green, Scotland.

He is an internationally best-selling Kindle author and has four books featuring DI Harry Evans and the Cumbrian Major Crimes Team, and three novels, featuring Utah doorman, Jake Boulder.
An avid fan of crime fiction since being given one of Enid Blyton’s Famous Five books at the age of eight, he has also been a regular reviewer and interviewer for the well-respected website Crimesquad.com since 2009
Graham is the founder of Crime and Publishment, a weekend of crime-writing classes which includes the chance for attendees to pitch their novels to agents and publishers. Since the first weekend in 2013, eight attendees have gone on to sign publishing contracts.

Giveaway
To celebrate the release of When the Waters Recede, Graham Smith is offering one lucky reader the chance to win all six books in the Harry Evans series.
To enter, simply sign up for his newsletter via the link provided before the 5th of June 2018 and you’ll be entered into not just this competition, but all competitions that he runs. Entrants from the whole world are welcome.
http://blogspot.us9.list-manage.com/subscribe?u=8bbfc9a3acb79a408253510a8&id=48d2dc65e5 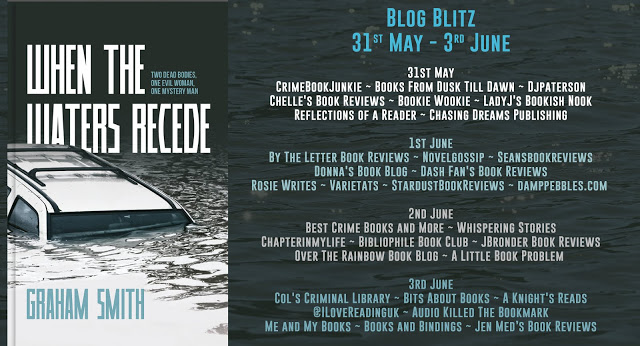