I am super excited to be kicking off The Babysitter by Sheryl Browne Blog Blitz with a 5 star review….Which is out today

The Book
You trust her with your family. Would you trust her with your life?
Mark and Melissa Cain are thrilled to have found Jade, a babysitter who is brilliant with their young children. Having seen her own house burn to the ground, Jade needs them as much as they need her. Moving Jade into the family home can only be a good thing, can’t it?
As Mark works long hours as a police officer and Melissa struggles with running a business, the family become ever more reliant on their babysitter, who is only too happy to help. And as Melissa begins to slip into depression, it’s Jade who is left picking up the pieces.
But Mark soon notices things aren’t quite as they seem. Things at home feel wrong, and as Mark begins to investigate their seemingly perfect sitter, what he discovers shocks him to his core. He’s met Jade before. And now he suspects he might know what she wants …
Mark is in a race against time to protect his family. But what will he find as he goes back to his family home?
If you loved reading The Girl on the Train, Behind Closed Doors and The Sister, you’ll love the suspense of The Babysitter. This unputdownable read will have you turning the pages until way after dark.
My Thoughts
OMG this has to be my favourite Sheryl Browne book….

I am a massive fan of Sheryl Browne’s DI Matthews series and I couldn’t wait to get stuck into The Baby Sitter which is a standalone psychological thriller the author brings us something totally different with this unputdownable story which is fan-flipping-tastic.

In this story we meet mother of Poppy, Melissa. Her husband and police officer Mark, who are struggling to juggle their work load around the upbringing and looking after their daughter. Until Jade the Babysitter comes along and is more than happy to help with Poppy and day to day tasks.

The reader is fully aware that Mark has meet Jade before so there I am thinking yeah, yeah I know where this story is going! But I was that gripped and intrigued I couldn’t turn the pages fast enough to find out what was going to happen…Then BOOM the story takes a twist I wasn’t expecting…How wrong was I !!!

The story is told with alternating chapters between the characters with each chapter leaving you wanting more. The tension build up is out of this world with plenty of OMG moments which will have your pulse racing.

Jade is one bitter and twisted person she made me so angry I just wanted to punch her. I love it when a character gets under your skin!

Fans of  psychological thrillers are seriously going to love this book. I know I did and it  ticked all the boxes for me. Which I cannot recommend enough giving it 5 massive stars.

Well done Sheryl you have totally nailed it!

Sheryl Browne brings you powerful psychological thriller and contemporary fiction. SheryI’s latest psychological thriller THE BABYSITTER – the first of a three-book deal – comes to you from fabulous BOOKOUTURE. A member of the Crime Writers’ Association and the Romantic Novelists’ Association, and previously writing for award winning Choc Lit, Sheryl has several books published and two short stories in Birmingham City University anthologies, where she completed her MA in Creative Writing.
So why does Sheryl write in two genres? Quoting E. L. Doctorow, Sheryl says: “Writing a novel is like driving a car at night. You can only see as far as your headlights…” This she thinks sums up a writer’s journey, you never quite know where you are going until you get there. You might start with an outline, but a strong character will always divert from the plot. If Sheryl’s not sure where a character is going, she simply has to trust him to show her the way. Plus, according to one reviewer, she also has a scary insight into the mind of a psychopath. 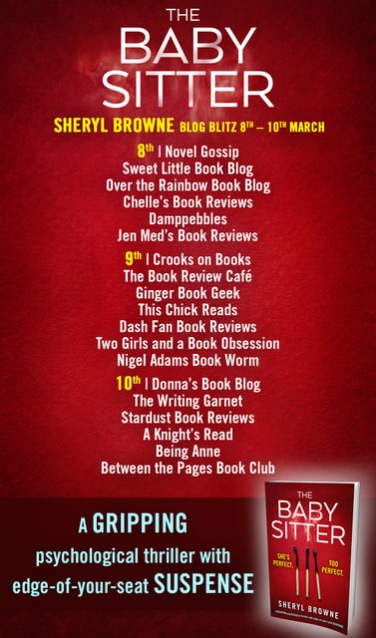