Can you describe your character?

Franklyn ‘Bermuda’ Jones is a put upon agent working for a secret government agency that monitors ‘The Otherside’ He was born with a genetic defect that allows him to see this world, known as ‘The Knack’, but he is the only human to have crossed to The Otherside and returned, thus making him the only human able to interact with that world and its inhabitants. He is partnered with a gentle warrior called Argyle, a soldier defected from the other world who acts not just as his protector, but his best friend.

He is a lonely soul, having lost his wife and child after being declared ‘insane’ for what he believed he could see. Although his wife has remarried, he still keeps them at arm’s length to protect them from the other world, doing his level best to maintain a relationship with his daughter. That, problem drinking and the ability to say the wrong thing pretty much sum him up.


What is his job role and where does he work?

The BTCO (Behind The Curtain Organisation) is a secret, government agency that specialises in maintaining the truce between our world and The Otherside. All humans are partnered with defected ‘Others’, as most humans cannot interact with the world and its habitants, only see it. Bermuda is the exception and seen by the higher ups as both an inconvenience and their greatest weapon.

Bermuda is assigned a case in London in DOORWAYS but THE ABSENT MAN sees him sent to Glasgow to hunt a killer that is brutally slaying women and removing their hearts. Reluctantly, he is good at his job and he and Argyle face most dangers head on together.


Where did the original  idea of him come about?

Originally, there was no Otherside or Argyle. The original idea was about a private investigator who was terminally sick, but his trial medication allowed him visions for 5 minutes at a time, allowing him to hunt for missing people via these visions.

Then I stumbled onto the idea of it being a different world and the idea just snowballed to a whole world, agency and Argyle! (who I love writing, so am so glad it did!)


What makes them original?

I was told by my publisher (when this was traditionall published) that if I could nail the relationship between Bermuda and Argyle, then the idea would sell itself. I think that’s what makes them original, is throughout it all, the craziness and dangers of both worlds and the enemies they face, the true heart of the story is their friendship and their willingness to do the right thing.

What makes them tick?

Beyond winding up his superiors, all Bermuda wants is to keep his daughter safe and after being committed to a mental home before being a BTCO agent, his only way to do that is to help govern the truce between the worlds. That, and his next pint of Doombar!

Argyle however, is driven by a sense of purpose and his orders are to protect Bermuda at all costs. Whilst this may render a few landmarks destroyed, Argyle constantly saves Bermuda’s life. Plus, he is pretty handy in a sword fight!

What is their biggest fear?

Bermuda is haunted by recurring dreams of everyone he knows falling to ash in a world on fire, before watching the other world literally rip his daughter to pieces. His fear is that sooner or later, the Otherside will spill over into our world and that he will fail to protect his daughter.

Argyle’s biggest fear is being seen as a monster, especially due to his cryptic background and past life (which are investigated more in The Absent Man).

If you and your character met in real life, do you think you’d get on?
I think so. Bermuda has a lot of ‘me’ in him with regards to his opinions on certain things. I also quite like a beer at times so reckon we could get along great! Argyle would also be cool, because who wouldn’t want to be friends with a sword wielding, invisible warrior with a heart of gold?


Who would you like to see play them if your books were made into a film or TV show?

Dream casting would be Dan Stevens for Bermuda, especially if he reverted to how he was in The Guest. For Argyle, think Idris Elba in the Thor films!!

The Absent Man is the second book in the series, which as of yet, I have at least five full novels planned!!

What’s in store for them next?

Well I have just finished the first draft of a prequel novella, called BERMUDA, which is about how Bermuda joined the BTCO and his first case. After that, the third novel, tentatively titled WORLDS APART is due for release late 2018, with a fourth, tentatively titled LOST IN THE ECHO, scheduled for 2019.. 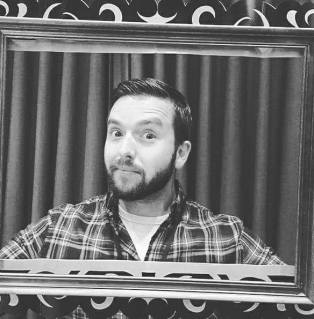 Author Bio:
Robert Enright was born and raised in North London and resides in Chesham, Buckinghamshire. Working as a HR System Manager by day, he spends his evenings and weekends writing (or binge watching TV with his fiance). Robert first self published One by One in March 2016 and saw it published by Britain’s Next Best Seller in October 2017. In early 2018, DOORWAYS will be re-released as an ebook, paperback and audio book under Robert Enright’s management. The sequel, THE ABSENT MAN will also be released in early 2018. The third in the series, WORLDS APART, is set for a late 2018 launch. A prequel, titled BERMUDA, is in the works for a 2018 launch also.
Links:
Website: www.robertenright.co.uk
Facebook: https://www.facebook.com/robenrightauthor/
Twitter: https://twitter.com/REnright_Author
Doorways: https://www.amazon.co.uk/Doorways-First-Bermuda-Jones-Casefile-ebook/dp/B07813HWTB/ref=asap_bc?ie=UTF8
The Absent Man https://www.amazon.co.uk/Absent-Man-Bermuda-Jones-Files-ebook/dp/B07B3NZYDH/ref=sr_1_1?s=books&ie=UTF8&qid=1520415680&sr=1-1&keywords=Absent+man