Skip to content
I am super excited to be kicking off THE INNOCENT WIFE Blog Tour today with a 5 star review.

The Book
HOW DO YOU CONFRONT YOUR HUSBAND WHEN YOU DON’T WANT TO KNOW THE TRUTH?

Gripping psychological suspense from a brilliant new voice in crime fiction
‘You can hear the ominous music from the first line onward – this is a fantastic thriller.’ Lee Child
‘An original, assured and compelling tale of obsession. Amy Lloyd is a startling new talent, destined to become a big name.’ Peter James
Twenty years ago, Dennis Danson was arrested and imprisoned for the brutal murder of a young girl in Florida’s Red River County. Now he’s the subject of a true-crime documentary that’s whipping up a frenzy online to uncover the truth and free a man who has been wrongly convicted.
A thousand miles away in England, Samantha is obsessed with Dennis’s case. She exchanges letters with him, and is quickly won over by his apparent charm and kindness to her. Soon she has left her old life behind to marry him and campaign for his release.
But when the campaign is successful and Dennis is freed, Sam begins to discover new details that suggest he may not be quite so innocent after all …
My Thoughts
I cannot begin to tell you how excited I am about this book which I couldn’t put down after starting it saying to myself I will just read a couple of chapters…..well that never happened. With an OMG prologue I was sucked into the world of Samantha and Dennis where we follow one rather shocking and unique story which I totally loved.
Set in Florida’s Red River County Dennis is facing time for a brutal murder of a young girl. and causing a storm online for his release to free him for being wrongly accused. Mean while back in England Samantha is obsessed with his case and writes to him it isn’t long before letters flow back and forth before them and Samantha leaves her life in England to marry him.  Then Dennis becomes a free man and things take a turn with Sam when she discovers something that might not make Dennis innocent after all.
First of all I have to say I cannot believe this is a debut novel, it is so damn good. This is one of those books that will eat you up and spit you out.
Having pen pals myself back in the day I really loved the letters between them which is the first part of the story I was fascinated between them and the author does a brilliant job of building the characters up through the letter writing. Even though we know that Samantha marries him I still couldn’t help thinking she was mad but of course this is all part of the story.
Samantha is a character who is insecure and has the story unfolds I actually felt sorry for her she is definitely the Innocent Wife. I just wanted to punch Dennis how he was when he is first released from prison….you will know exactly what I mean when you read it yourself.
The Innocent Wife is one very well crafted story and is full of mystery and suspense…..it will have to guessing until the very end that’s for sure it ticked all the books for me and I think fans of true crime stories will also love it. I can see it being a big hit for 2018 and cannot wait to see what the author has in store for us next
This book is a must read which I highly recommend giving it 5 massive stars. Thank you to Penguin for a copy in exchange for an honest review. And I would also like to thank Anne Cater for inviting me to take part in this epic tour.
Amazon Link
About the author 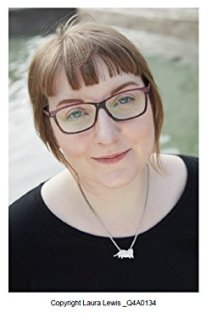 The Innocent Wife is my first novel and it will be available on e-book from the 10th October 2017 and then in hardback on the 28th December 2017.When I started writing The Innocent Wife, I was trying to write the book I wanted to read. I love true crime and was fascinated by the new wave of true crime that was gaining popularity, like Making a Murderer and Serial, so I wanted to play on that phenomenon. I love the way that when we consume this kind of true crime, we think we are detectives ourselves and we feel passionate about righting the wrongs in the justice system. I also like the more sinister implications of this new trend. What if a documentary wasn’t telling the whole truth? How can we ever be sure that someone is innocent or not?I’ve also been curious about the kinds of people who write to inmates and especially women who marry dangerous men on Death Row. Often they seem to believe the men are innocent despite overwhelming evidence to the contrary. Do they really believe they are innocent, or are they drawn to the danger of these men? What would happen if that man were suddenly released and they were thrust into the reality of being married to them?The Innocent Wife was my chance to explore all these questions and put them into the kind of fast-paced thriller I love to read. To me, it is the characters that turn a good book into a great book and I loved creating flawed and messy characters who don’t always do what they should. I hope you enjoy The Innocent Wife as much as I enjoyed writing it! Thank you so much for the support and hopefully there will be lots more like this to come.Amy 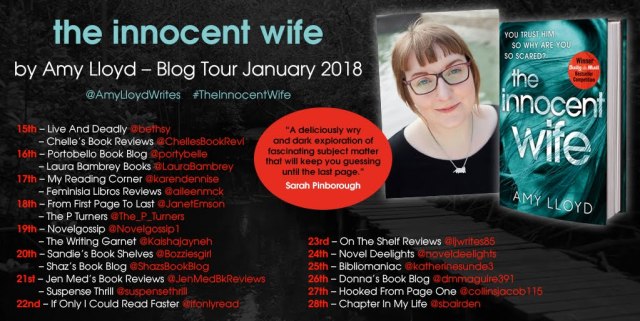 One thought on “The Innocent Wife by Amy Lloyd #BlogTour”