The Book
Secrets & Lies Are Dangerous.

When Jacques’s body is discovered in a hotel room his wife, Patricia, suspects
he has been hiding something from her.

Why was he found naked and who is the woman that visited his grave on the
day of the funeral? Significantly, who is the unnamed beneficiary Jacques left
a large sum of money to in his will and what is the reason her best friend, also
Jacques’s sister, Coco, refuses to tell her what he confided to her?

Struggling to find out the truth, Patricia visits Malmö where her twin sister
Jasmine lives and is married to her ex boyfriend. But the sisters relationship is
toxic and when a family member dies shortly after, an old secret is revealed that
shines a light on an event that took place on their tenth birthday.

As one revelation after another is revealed, Patricia is yet to discover her
husband’s biggest secret and what ultimately cost him his life.

His Guilty Secret is an unafraid examination of the tangled bonds between
siblings, the lengths we go to in protecting our wrongdoings, and the enduring
psychological effects this has on the innocent…and the not so innocent.

Hélene Fermont is the author of three books. Because of You and We Never
Said Goodbye are also available on Kindle and in print from Amazon. 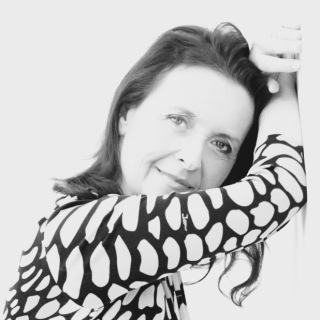 Good morning welcome to Chelle’s Book Reviews. Can you tell us a little
about yourself and background?
Hello. Great to get to know you!
I am a writer and also a psychologist specialising in treating children with severe
disabilities and learning difficulties. My debut novel Because of You was
published early last year followed quickly by my second which is called We
Never Said Goodbye. I have an Anglo-Swedish background and grew up in
Malmö.

When did you know that you wanted to become a writer? and how did you
go about it?
I knew from an early age that I wanted to write. At school I submitted essays in
competitions, carried a notepad with me nearly everywhere I went and was
always an avid reader. My late mother had a book club and our home life was
filled with literature. I always have a premise for a story – a spark – and create
characterisations before I write the novels.

Can you tell us what genre your books are and the audience you write for?
I write for everyone but my audience is mainly women over thirty and I write in
English. The genre is contemporary women’s fiction to which I add my own
psychological and Scandinavian twist. ; )

What is your writing process? and how long does it take?
I always create my characters first. That can take up to six months. When I’m
satisfied they’re fully three-dimensional, I start to write the novel and will write
x drafts until I feel happy with the content. After that’s done, my editor and I
collaborate until both of us agree it is the best it can be. Altogether the process
takes approximately six to eight months. Because of You took longer – around
fourteen months – because it was a much bigger book spanning over three
decades. I am meticulous about the novel content coming across as genuine,
emotive and relatable. Not forgetting thought provoking, exciting and page
turning!

Are your characters based on anyone you know or are they just fictional?
My characters are entirely fictional. Like most authors, I do draw on my own
experiences, and sometimes my professional life, but I avoid basing actual story
lines on personal events or people I’ve encountered. My most recent book is
called We Never Said Goodbye about a woman with a seemingly ‘perfect’ life
who has everything she knows swept away from her when her husband leaves
her without warning on their twentieth wedding anniversary. So cruel! And a
situation that women in middle age increasingly seem to find themselves in.
How does one go about starting over? And how do you cope when someone
you thought you knew as well as yourself becomes a terrifying stranger
overnight?

Have you wrote about a personal experience in your novels?
The one exception I could mention is a character in Because of You who is
battling dementia. That character was based on a close relative who actually
wanted me to write about this very sad and common condition. It was quite hard
to write about something so close to my heart but I have received very positive
feedback from readers who are familiar with the disease.

What research do you do?
I research everything by any means that is available to me. The Internet is
often my starting point but not always 100% accurate so I don’t rely on it too
much. If possible I travel to research. It’s wonderful to re-discover places I’ve
not visited for a while, keep up with transitions and update myself generally on
relevant subjects.

Who would you like to co-write with and why?
Gosh, that’s a difficult question to answer! Instinctively, I’m not sure it would be
possible – although I rule nothing out! I suppose you’d have to ask me again in
the future. As things stand, I’m very content writing on my own. My characters
and plots are quite personal since they stem from my own particular
interpretations of life and people.

What’s your favorite book?
I’ve got so many favourite authors! The one I keep returning to regularly is
LaVyrle Spencer whose books are very emotional; particularly Small Town Girl.
Every time I read it, the characters and story line resonate a lot with my own
feelings. And I enjoy everything by the wonderful iconic Swedish poet Karin
Boye. Her poems go straight to my heart.

What’s your favorite food?
As a native Swede, I absolutely love fish and Italian cuisine. And can not resist
salted licorice!

What’s your favorite film?
My favourite films are Bergman’s Fanny & Alexander and The Notebook.

What’s your favorite song?
I have quite diverse musical preferences. I particularly like anything by the
Swedish artist Ted Gärdestad. But then there’s Burt Bacharach and Adele too!

How can readers find out more information about yourself and your books?
I have an author website at www.helenefermont.com and I’m on Twitter
(www.twitter.com/HeleneFermont/), Facebook
(www.facebook.com/helenefermontauthor/) and Instagram
(www.instagram.com/helenefermont). My latest blog post features a recording
of an interview I gave about We Never Said Goodbye on Talk Radio Europe a
few weeks ago. That was great fun!
My new book – His Guilty Secret – is published by Fridhem Publishing and is out
now Amazon uk

Thank you so much for joining me today
Thanks for taking the time to interview me! 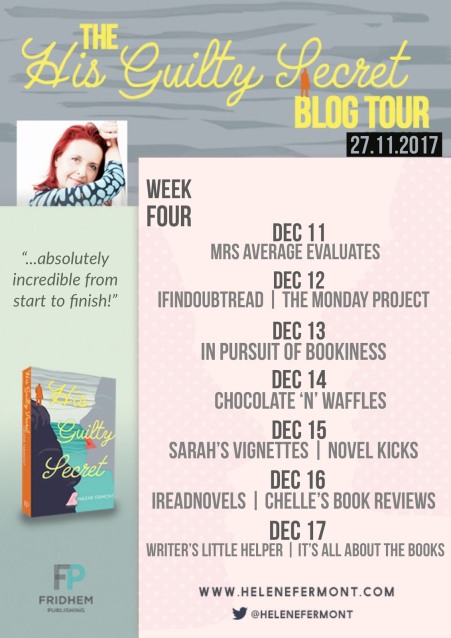