I am delighted to share my 4 star review for Chasing the Traveller by Alex Kane on Blog Tour today. 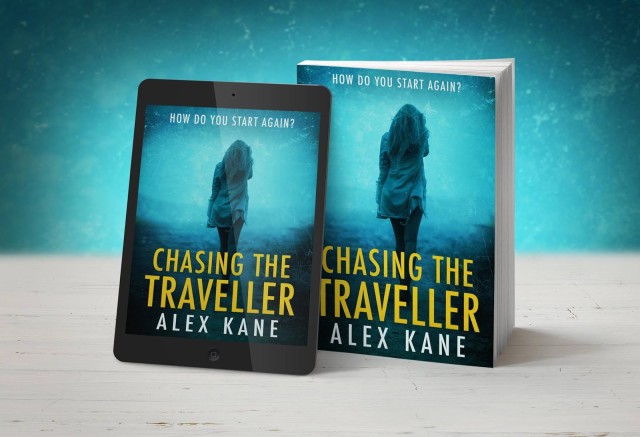 The Book
Kat is trapped in a world where she has never belonged. As a traveller, she has always felt lost, especially since the death of her parents in a fire when she was fourteen years old. Having been taken on by the Denton family as their own, Kat falls in love with their son, tearaway Jimmy. His charm soon wears off and Kat finds herself married to a controlling and violent thug.

Sixteen years later, Kat decides enough is enough and begins plotting her escape from a lifetime of abuse.

Stripped of her personality, Kat has no idea how to start again but she finds an unlikely ally in her sister-in-law Ellie who shows Kat that she is not alone.

Kat and Ellie Denton begin their venture into a new world, where they meet new people and build new lives. But Kat still wants to know more about her parents’ past and when she seeks the location of an address on the back of a family photograph, Kat begins to uncover more than she expected including a revelation that will lead Kat back to the traveller site she had been so desperate to escape from.

Will she find the answers she is looking for, or will she fall prey to the violent Jimmy Denton once more?

MyThoughts
Chasing The Traveller is by Alex Kane otherwise known as Emma Clapperton. Author of supernatural crime series with Patrick McLaughlin, which I must say I am a big fan of. So I was very intrigued to read this novel with the author switching genre. And has always I do love the author’s style of writing. She definitely knows how to grab your attention from the start and keep you there until the very end.

In this story we follow Kat on an emotional rollercoaster journey after she finally gets the courage to leave Jimmy who is a control freak. Having lived the life has a traveller and losing her parents in a fire. The only person she has is her sister-in-law Ellie. Kat and Ellie begin to venture into a new world and begin to rebuild their lives, But Kat wants to know more about her parents and how they died. She begins to uncover more than she expected including a revelation that will lead Kat back to the traveller site she had been so desperate to escape from.
Will she find the answers she is looking for, or will she fall prey to the violent Jimmy Denton once more?

So I went into this story knowing it was a psychological thriller but not realising it was a domestic noir. Which most you know that I am not a fan of. It starts off with a very powerful prologue which I loved, then it moves to a slower pace where we follow Kat rebuilding her life. But then the story took a turn I wasn’t expecting and I ended up really enjoyed it.

I loved the fact that the story is about travellers and knowing some myself this story is very realistic and original. The author does a brilliant job of making the reader feel the emotion and anxiety the characters go through. But will also keep you on tender hooks.

This is a very well written story which I highly recommend giving it 4 stars. Grab your copy now from Amazon for only 99p 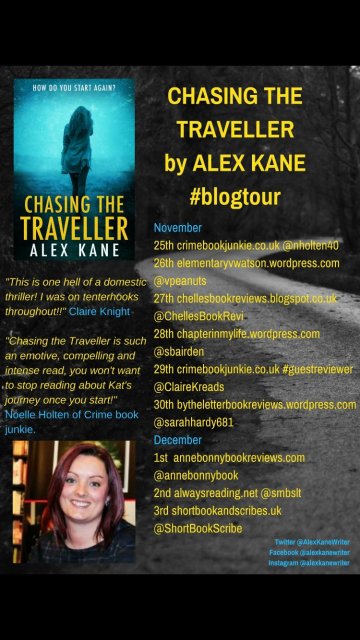 2 thoughts on “Chasing the Traveller by Alex Kane #BlogTour”