DI Jake Flannagan, the wayward and headstrong detective, is the main protagonist in my crime thrillers. Having spent twenty years in the police, I can tell you a lot about his background, about how he thinks, what makes him happy, even how many sugars he takes in his tea.

It wasn’t a conscious decision, not at first. When I started writing The Theseus Paradox, I took all sorts of advice from well-known authors about how they introduce a physical description of their main character into their books. They told me some of the dreaded clichés to avoid – including the one where the character stands before a mirror and the author tells the reader what they see in the reflection. Rather than awkwardly shoehorn Jake’s appearance in, I decided to leave it until I found exactly the right time and place.

Except…this never happened. My story grew and grew, with different people reading parts of it as I went along. My scribbled scraps of paper went from being some words on a page, into a proper book, and I still hadn’t found the right place to put Jake’s description in.

Then something occurred which I hadn’t anticipated. My initial readers began to suggest what he looked like. The diverse range of ideas was quite incredible. They all had completely different opinions.

It was something quite amazing and magical to me; those sparks of imagination that fans had used to construct ‘their Jake’ in their own minds. And I realised, I couldn’t take ‘their Jake’ from them. So I decided never to say what he looks like. Everyone’s Jake Flannagan is unique to them. And I love that.

What is Jake’s job and where does he work?

In The Theseus Paradox, Jake works, as I did for many years, as a detective on the Anti-Terrorist Branch, which then becomes Counter Terror Command in book two, The Detriment.

He is based in London at New Scotland Yard, though travels a fair amount with his role – and spends far too much time getting into scrapes away from home.

Where/how did the original idea of Jake come about?

Jake is very much based on my own experiences; on my twenty-year career in the police. I began writing because, despite years and years of painstaking work on Operation Theseus, (the investigation into the London 7/7 bombings) I felt that we only ever scratched the surface of what really went on. I had a story to tell and I didn’t want it to die with me.

Many people like me, who have worked in the police and emergency services, can’t always enjoy reading or watching a lot of crime fiction because certain inaccuracies and inconsistencies will pull them out of the story.

Jake gets from A to B solving crimes the way a real detective does. You get accurate police knowhow from him.

I would say Jake’s authenticity is what sets him apart. I don’t write Hollywood policing; I tell it like it is. I write it as it happens in real life. When people ask how much of me is in my books, I say I do all my own stunts.

To catch a bad guy, you’ve got to think like a bad guy, and that’s why the best detectives always have a dark side. Jake has a real problem with rules, a problem with being told what to do, and a problem with pretty much every relationship that he has in his life. Jake believes that the bad guys must always lose, at all costs, and what comes with that is a whole host of complex moral and ethical dilemmas as he tries to solve the unsolvable, but somehow stay on the right side of the law.

He sees it as doing his job, doing the right thing. But the reality is, he thrives on getting to the truth. And sometimes nothing else matters as he careers headlong towards that end goal…

Jake is the kind of person who will chase a suspect up a train track with no thought for the potential consequences. In that moment, he’s more scared of losing against the bad guys than thinking he might get mown down by a train.

The fear of failure permeates every area of Jake’s life. His subconscious is constantly terrified of the thought that he could die of old age without having made a difference; without having got to the truth, without having achieved something; without leaving a legacy. He wants to pack as much into this one life as he possibly can, before he has to depart it.

His biggest problem though is that he doesn’t realise most of this. He doesn’t actually know what balance or success looks like in either his professional or personal life, and is in a constant hunt for what that is.   And I think that’s the same for many of us.

If you and your character met in real life, do you think you’d get on?

Oh god, it would be a nightmare! We’d be out painting the town red, and the place wouldn’t know what had hit it.  In many ways, Jake is the demon on my shoulder, but also my guardian angel. Imagine going out for a drink with your conscience and temptation both at the same time…

Who would you like to see play Jake if your books were made into a film or TV show?

You can see from just that list how readers have very different views on what Jake looks like and why I am loath to describe him! 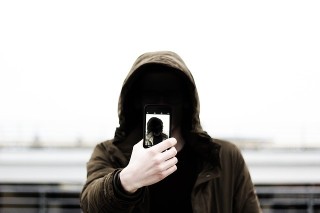 As an author, I’d like to see an up and coming actor take the character on and make it totally their own. In the way that we see Daniel Radcliffe owning the Harry Potter role, I’d love to see someone new interpret Jake. We get to see a different face on our screens and it gives a new talent the chance to come through.

Who would you prefer, Shell?
HA HA HA David! Other than yourself I would have to say Sean Bean

There are currently two books in the Jake Flannagan series available, with another in progress.  In The Theseus Paradox, Detective Jake Flannagan investigates the reasons behind London’s 7/7 bombings and asks whether they were the perfect ploy for the greatest criminal deception of our time.

Eighteen months on from this, The Detriment unravels the mystery behind the burning Jeep attack on Glasgow Airport, as Jake discovers that the truth costs nothing, but a lie can cost you everything…

What’s in store for Jake next?
I’m working on book three in the series which will see Jake go abroad to work and end up becoming embroiled in a very famous investigation. If everything goes to plan and I don’t get distracted by my other projects, this should be out by the end of 2018.

I’m also researching an idea with a documentary maker right now about solving an infamous real-life mystery which readers of a certain again will remember well. At this stage I can’t yet say what it is, but there is the possibility of this becoming a non-fiction book in the future.

Former Scotland Yard detective, David Videcette is the author of detective thrillers The Theseus Paradox and The Detriment.  Based on true events, David’s books are perfect for readers who like their crime fiction as close to real crime as it gets. How much is truth and how much is fiction, only YOU can decide!
David loves to interact with crime fiction fans. Readers can chat to him on Facebook, or Twitter or Instagram. For the chance to win a signed copy of David’s latest thriller in his regular draw, pop in your email address here.

One thought on “Getting To Know The Character with Jake Flannagan”