Skip to content
I am delighted to share my 4 star review with you
on Blog Tour  for House of Spines by Michael J Malone which is out now.

The Book
Ran McGhie’s world has been turned upside down. A young, lonely and frustrated writer, and suffering from mental-health problems, he discovers that his long-dead mother was related to one of Glasgow’s oldest merchant families. Not only that, but Ran has inherited Newton Hall, a vast mansion that belonged to his great-uncle, who appears to have been watching from afar as his estranged great-nephew has grown up. Entering his new-found home, he finds that Great-Uncle Fitzpatrick has turned it into a temple to the written word – the perfect place for poet Ran. But everything is not as it seems. As he explores the Hall’s endless corridors, Ran’s grasp on reality appears to be loosening. And then he comes across an ancient lift; and in that lift a mirror. And in the mirror … the reflection of a woman … A terrifying psychological thriller with more than a hint of the Gothic, House of Spines is a love letter to the power of books, and an exploration of how lust and betrayal can be deadly…

This is my first book that I have read by Michael J Malone and certainly won’t be last. House of Spines is a Gothic psychological thriller with a difference….It’s a ghost story. I have to say I do love a good ghost story so I couldn’t wait to get my teeth into this beauty.

Michael weaves a creepy and atmospheric read where we meet Ranald McGhie a young lonely frustrated writer with mental health problems who finds himself at a lawyer’s for a will reading. Living in a flat he inherits Newton Hall the home where his uncle lived. Now this is where it all gets spooky. Ranald finds and ancient lift with a mirror.  And in the mirror is a reflection of a woman. But who is she?

It isn’t one of your fast paced stories that I would normally read
This is one beautifully written story with amazing descriptions. The author pulls you in from the start and weaves one very well crafted story. That tells a story of love and betrayal and is full of mystery.

For those of you that like ghost stories I highly recommend it giving it 4 stars.
Thank you to Anne Cater and Orenda books for inviting me to take part in this tour. 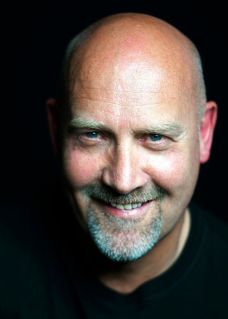 Michael Malone was born and brought up in the heart of Burns’ country, just a stone’s throw from the great man’s cottage in Ayr. Well, a stone thrown by a catapult, maybe.

He has published over 200 poems in literary magazines throughout the UK, including New Writing Scotland, Poetry Scotland and Markings. His career as a poet has also included a (very) brief stint as the Poet-In-Residence for an adult gift shop. Don’t ask.

BLOOD TEARS, his debut novel won the Pitlochry Prize (judge:Alex Gray) from the Scottish Association of Writers and when it was published he added a “J” to his name to differentiate it from the work of his talented U.S. namesake.

He is a regular reviewer for the hugely popular crime fiction website http://www.crimesquad.com and his blog, May Contain Nuts can be found at http://mickmal1.blogspot.com/
He can be found on twitter – @michaelJmalone1