Skip to content
I am delighted to share with you my 5 star review for Body Breaker by Mike Craven on Blog Tour today. 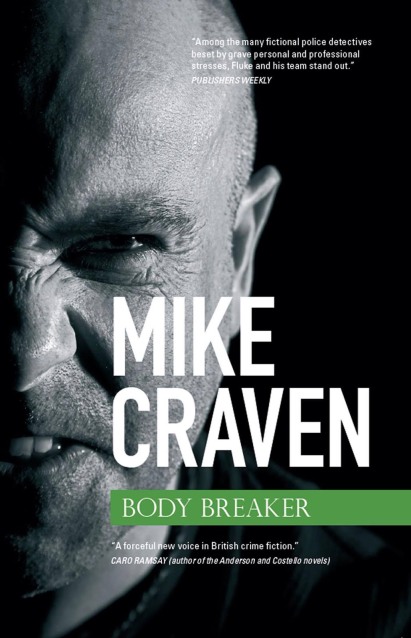 The Book
Investigating a severed hand found on the 3rd green of a Cumbrian golf course was not how Detective Inspector Avison Fluke had planned to spend his Saturday. So when a secretive unit from London swoop in quoting national security, he’s secretly pleased.
But trouble is never far away. A young woman arrives at his lakeside cabin with a cryptic message: a code known to only a handful of people and it forces Fluke back into the investigation he’s just been barred from.
In a case that will change his life forever, Fluke immerses himself in a world of new age travellers, corrupt cops and domestic extremists. Before long he’s alienated his entire team, made a pact with the devil and been arrested under the terrorism act.
But Fluke is only getting started. A voice has called out to him from beyond the grave and he has no intention of ignoring it.
My Thoughts
Body Breaker is the second book in the DI Avison Fluke series and is the first book that I have read by this author. Yes this can be read has a standalone but I will certainly be reading the first book in the series. Infact I will be reading all the books by this author, Not only have I found a brilliant Detective but I have also found a new author. Mike Craven knows how to write a gripping page turner…..I freaking looked this book!
With an opening that starts with a bang when Fluke is called to investigate a severed hand found on a golf course. With a gruesome start that was it for me, I was totally hooked. Body Breaker is packed full of police procedure telling one extremely well crafted story.
Avison Fluke, what a name and I loved his sense of humor in fact I just love him! Fluke and his partner Towler they certainly make an excellent team.  With a friendship that goes back years.
This story has plenty of twists and turns and is everything a crime thriller should be. It ticked all the boxes for me giving it 5 well deserved stars. I seriously can’t wait to read the next one.
Author Bio: 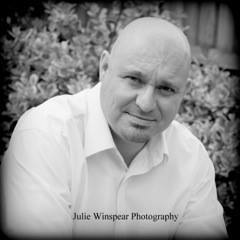 Although he was born in Cumbria, Mike Craven grew up in the North East before running away to join the army as soon as he was sixteen. After training as an armourer for two and a half years (that’s an army gunsmith to you and I), he spent the next ten travelling the world having fun. In 1995 he left the army, and after a brief flirtation with close protection and bodyguarding, decided on a degree in social work with specialisms in criminology and substance misuse. In 1999 he joined Cumbria Probation Service as a probation officer, working his way up to chief officer grade. Sixteen years later, he took the plunge and accepted redundancy to concentrate on writing full-time, and now has entirely different motivations for trying to get inside the minds of criminals.
Mike’s first DI Avison Fluke novel, Born in a Burial Gown, was shortlisted for the Crime Writers’ Association Debut Dagger Award and was published on 11th June 2015 by Caffeine Nights. Also available is his award winning collection of short stories featuring Fluke and his colleagues from the Cumbrian Force Major Incident Team, Assume Nothing, Believe Nobody, Challenge Everything. Body Breaker, the hotly anticipated follow up to Born in a Burial Gown, is out on May 25th.
In March 2017, Mike signed a two book contract with the Little, Brown imprint, Constable, for his new series starring the National Crime Agency’s Washington Poe, an expert in serial killers and seemingly motiveless crimes. The first Poe book – as yet untitled – will be published in hardback in spring 2018. Between leaving the army and securing his first publishing deal, Mike found time to keep a pet crocodile, breed snakes, get married, and buy a springer spaniel named Bracken. He lives in Carlisle with his wife, Joanne, where he tries to leave the house as little as possible. Mike is also one third of Crime Ink-Corporated, a trio of northern writers who take writing out for the community and host events such as England’s first Noir at the Bar. Mike’s first DI Avison Fluke novel, Born in a Burial Gown, was shortlisted for the Crime Writers’ Association Debut Dagger Award. He is a member of both the Crime Writers’ Association and the International Thriller Writers’ Association.
Links:
Website: http://www.mikecraven.co.uk/
Facebook: https://www.facebook.com/MikeCravenAuthor/
Goodreads: https://www.goodreads.com/author/show/13574494.Mike_Craven
Author Profile on Caffeine Nights: http://www.caffeinenights.com/mike-craven
Twitter: https://twitter.com/MWCravenUK/status/786952463148548097 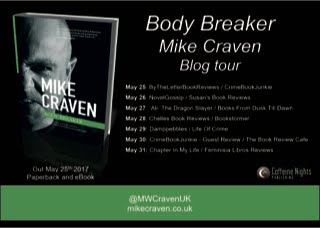 The biggest thank you to @ljross_author for a copy of #therock to add to my gorgeous collection of books 🤩 #dciryanmystery #ljross #bookpost #bookblogger #bookstagram #paperbook @ljrossbookclub @ljrossauthor
Massive thank you to @sarah_hilary999 for my #TheakstonsCrime @HarrogateFest FOMO care package....I love it 😍 #fragile #competitionprize #winner #bookpost #bookstagram
I'm #reading #TheFamilyTree by Steph Mullin & Nicole Mabry.....it's really good! #mondayvibes #bookstagrammer #books @avonbooksuk
Scrolling through #twitter and I spot this.
Happy Publication Day @author_nicola I've got my copy of #welcometoferrylanemarket from Sainburys wombourne 😀
On the beach #reading #invisiblevictim by @mel_sherratt #sundayvibes #arc #bookstagram #bookouture
Follow my blog with Bloglovin