Today I am one of three stops for Sleep Tight by Caroline Mitchell which is out now you can grab your copy on the link below. 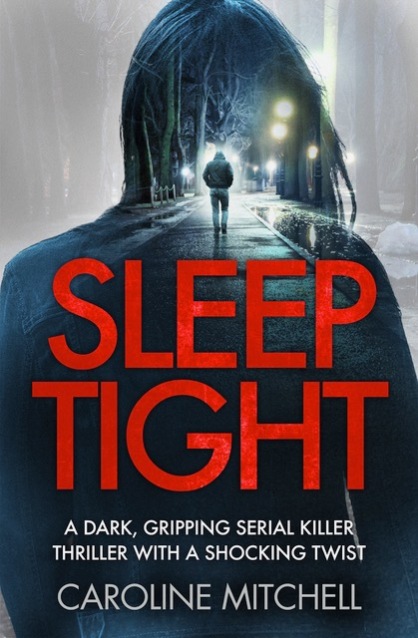 The Book
SLEEP TIGHT by Caroline Mitchell
Close your eyes … Just pray you don’t wake up.
A killer stalks the streets of East London. All over the area, murdered young women are discovered, their bodies posed into a sickening recreation of fairytale princesses.
Detective Ruby Preston is determined to hunt down a disturbed individual who is using the women to realise their twisted fantasies. But when body parts are found at the home of her lover, Nathan Crosby, Ruby is torn between her job and her heart.
Convinced that he is being framed, Ruby must catch the killer before Nathan becomes the number one suspect. But as more victims are found, it becomes harder to prove his innocence.
Ruby is in too deep, knowing that the cruel individual is getting ever closer, looking for his next beautiful victim. But can she stop a killer hell-bent on fulfilling their horrific desires – before it’s too late? And how well does she really know the man she loves?
A terrifying, addictive serial killer thriller that will keep you on the edge of your seat, for readers of Angela Marsons, Peter James and Rachel Abbott.

My Thoughts
Just when I thought Caroline Mitchell writing couldn’t get any better with Love You To Death which was my favourite book that I read last year. She totally nails it with Sleep Tight and pulls out all the punches. OMFG what a book and what a series!

The story starts off with one gritty prologue then we follow Detective Ruby Preston on one twisted roller coaster ride on the hunt for a warped minded killer who stalks the streets of London and leaving the victims dressed up as fairy tale princess.  Put someone is trying to frame bad boy hottie Nathan with body parts planted under his bed. Ruby has totally got her work cut out trying to catch the killer before Nathan becomes the number one suspect. Leaving Ruby torn between her job and her lover.

Wow, Wow, Wow I couldn’t turn the pages fast enough to find out what was going to happen next in this nail biting story. I cannot tell you how much I love this series. Ruby is one kick ass detective who lives life on the edge and doesn’t always do things by the book. For a start her lover Nathan isn’t always on the right side of the law and Ruby knows it. Which makes this series unique.

Caroline’s experience is shown throughout the whole of this story with the police procedure side of things. I actually felt like I was right there in the story. And like Love Me Death there is plenty of twisted and brutal murder scenes which totally turned my stomach and made me cringe.

Sleep Tight ticked all the boxes for me I cannot recommend it enough giving me a book hangover. Roll on the third book in  the series.

If you’re looking for a fast paced gritty story this is certainly the book for you. And without a doubt gets all the stars from me.

About the Author:
A former police detective, Caroline has worked in CID and specialised in roles dealing with vulnerable victims, high risk victims of domestic abuse, and serious sexual offences.
Originally from Ireland, Caroline lives with her family in a pretty village on the coast of Essex.  She now writes full time.
www.caroline-writes.com
https://www.facebook.com/CMitchellAuthor/
https://twitter.com/Caroline_writes