Skip to content
I am super excited that today is my turn to host t I know Your Secret By Graham Smith Blog Tour and I would like to share you my 5 star review with you.

Cover Blurb: I Know Your Secret

DI Harry Evans – Book 2
“What would you do if your most intimate secrets got into the wrong hands?”
Set in modern day Cumbria, I Know Your Secret is a police thriller in which a priest is found crucified to the stone floor of his church. Fearing more attacks on the clergy, DI John Campbell and his team of misfits race to find the killer before he strikes again.
Meanwhile, DI Harry Evans, spends his days attending the trial of his wife’s rapist and his nights interfering in the investigation.
Can they catch the killer before he strikes again?

My thoughts
Well this is the third book that I have my Graham in a matter of weeks I am starting to feel like a Stalker now lol But there is something about this author that I simply love. His writing skills are fresh and crisp Everything is kept simple, I can’t be doing with too much waffle and Graham just seems to hit the nail on the head with each book that i have read. Oh and did I mention they are very addictive, I found myself totally sucked in from the start to the end. There is never a dull moment thats for sure!
This is the second DI Harry Evans novel. But having read Snatched from Home and loving that. I can’t believe I am saying this…..but yes this one is even better!!! you guys are in for a treat that’s for sure.
So in this story Father Patterson is murdered where he is found crucified. DI John Campbell and his team of misfits race to find the killer before he strikes again. While DI Harry Evans is spending time at a trail of his wife’s rapist.
Holy Hell what a story line!!! there is lots going on in this story starting with a murder investigation, a brutal assault and a blackmailer but the question is  how is all this linked to the murder of the priest?!
From nitty gritty forensic work to courtroom action…… OMG what a book. . The author has certainly done some research because it really does show. I love the fact this story has all the courtroom side of things going on. I must say it is rare to read this in a novel but Graham has certainly packed some punches with this story.It is a must read for you crime fans. I love Evans character has I have said before. But with this story we get to read more of DI John Campbell And although this story is gritty and brutal they is always some humor in it with these guys they are just fab.
Once again this book has it all which I highly recommend giving it 5 massive stars.
Thank you to Noelle Holton,Graham Smith and Caffeine nights for an advanced copy in exchange for an honest review. 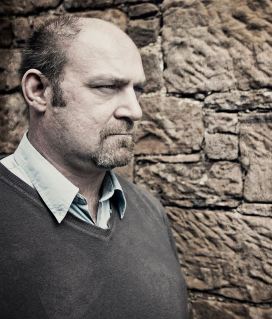 Graham Smith is married with a young son. A time served joiner he has built bridges, houses, dug drains and slated roofs to make ends meet. Since Christmas 2000 he has been manager of a busy hotel and wedding venue near Gretna Green, Scotland.

An avid fan of crime fiction since being given one of Enid Blyton’s Famous Five books at the age of eight, he has also been a regular reviewer and interviewer for the well-respected website Crimesquad.com since 2009

He is the author of four books featuring DI harry Evans and the Cumbrian Major Crimes Team.