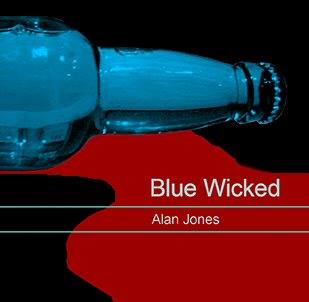 I would like to welcome Alan Jones author of  The Cabinetmaker and Blue Wicked to my blog page. Alan has kindly offered to take part in my Q&A Interview…. So without further ado here is Alan Jones


Can you tell us a little about yourself and background Please?

Are your characters based on anyone you know or are they just fictional?
I get totally under the skin of all my characters; that’s the only way I can write dialogue for them. They are a mixture of bits of me and people I know, have come in contact with, or have read about in newspapers. A few have come from completely nowhere.
Have you wrote about a personal experience in your novels?
For my character’s backgrounds, I’ve used my own experiences to flesh out their lives but having never murdered anyone (I thought I’d better clear that one up), or solved a crime, I’ve had to rely on talking to others or just using my imagination. One of my relations is a DI in Glasgow and another is a criminal defence lawyer. Having said that, apart from a little background, I tend to write the book then check with them afterwards, to tidy up any glaring errors.
What research do you do?
I mostly write about stuff I know well, but I’ll still do a bit of research to check for accuracy, and I also do a bit of timeline research to make sure actual events in my story are correctly timed. I try to use locations I know well, but I’ll revisit them to make sure the details are all correct. In the book I am currently writing, a Glasgow man travels to London to try and find his daughter who has gone missing. I don’t know London as well as Glasgow, so I used google maps and google earth extensively, along with the amazing street view, which puts you right there, even to the level of being able to go inside pubs and other places. I’ll still have to take a trip down to London to double check the locations I’ve chosen. I’m also looking for someone that knows London really well to read the first draft of the new book, and make any comments on the accuracy and realism of the locations I’ve used.
Who would you like to co-write with and why?
I don’t think I could co-write. I would be a nightmare to work with.
What’s your favorite book?
Trainspotting, by Irvine Welsh. Just amazing.
What’s your favorite food?
That has to be a curry. Lamb Dhansak with naan bread.
What’s your favorite film?
Shawshank just came out on top but Silkwood came close
What’s your favorite song?
Again, I’m under pressure here. Ultimately, Teenage Kicks by the Undertones just edged out
The Sex Pistol’s Pretty Vacant. I can’t escape my 17 year old self!
How can readers find out more information about yourself and your books?
I have a website for each book:
www.thecabinetmaker.info  and
www.bluewicked.co.uk
Each contains four free chapters and an Audio Slang Dictionary for those who aren’t completely familiar with the Glasgow dialect.
I regularly post news and comment on twitter @alanjonesbooks
and on my facebook page www.facebook.com/AlanJonesBooks, both of which you can follow.

Thank you Alan so much for taking time out to do this interview.
Thank you to, I have enjoyed it.

One thought on “Q&A interview with Alan Jones”